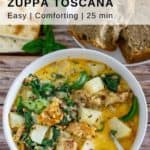 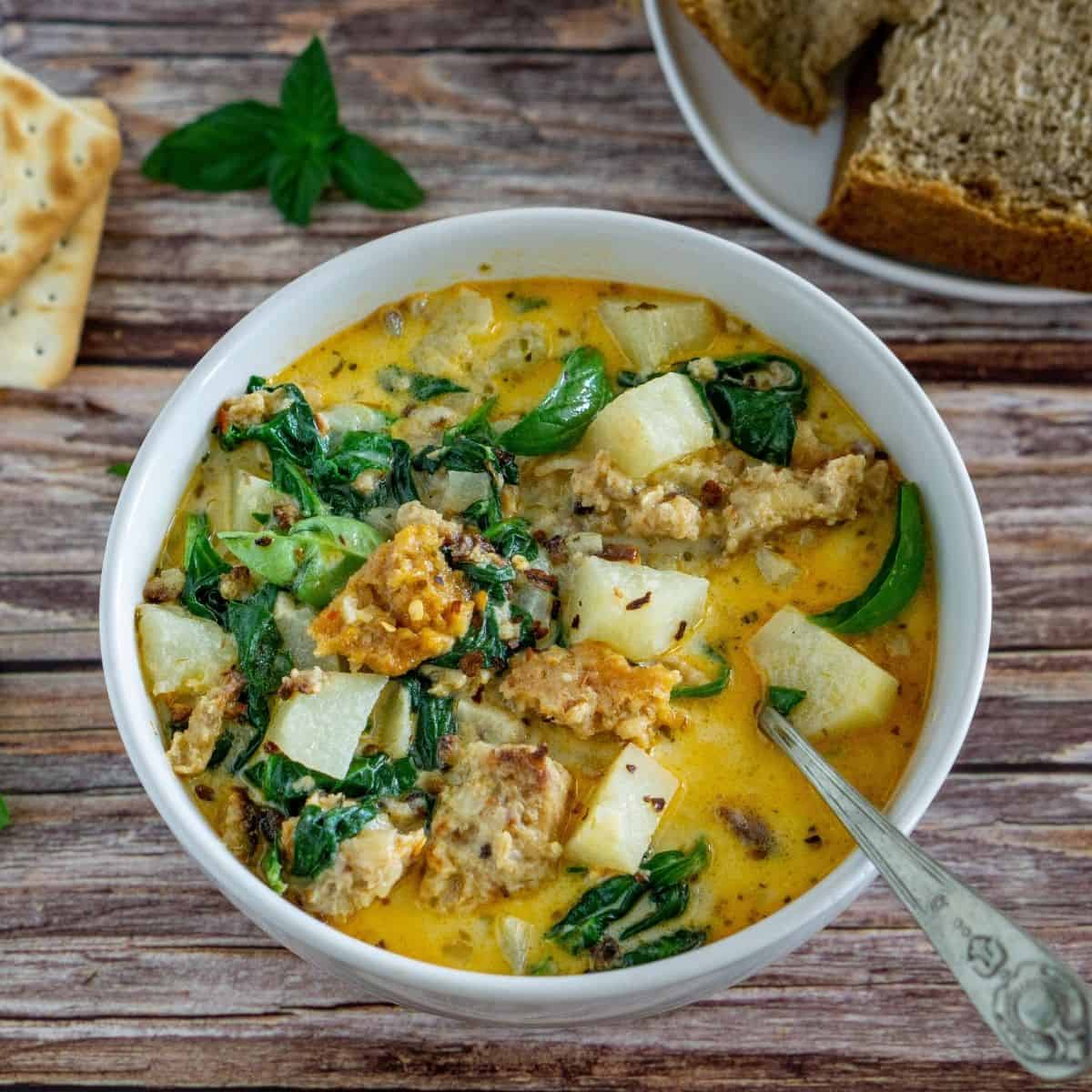 This soup is ready in under 25 minutes, meaning you can have a belly-warming, soul-warming soup any night of the week, even busy weeknights! It's loaded with rich savory flavors and will please anyone - vegans and meat eaters alike!

I absolutely love really chunky soups filled with lots of hearty ingredients. They are the ultimate comfort food for me, especially when served with a fresh warm dinner roll.

This soup has potatoes and vegan sausage to give it that really nice savory, satisfying flavor. The broth for this soup is made of canned coconut milk and vegetable stock, giving it a rich, tasty flavor and mouthfeel without any dairy. 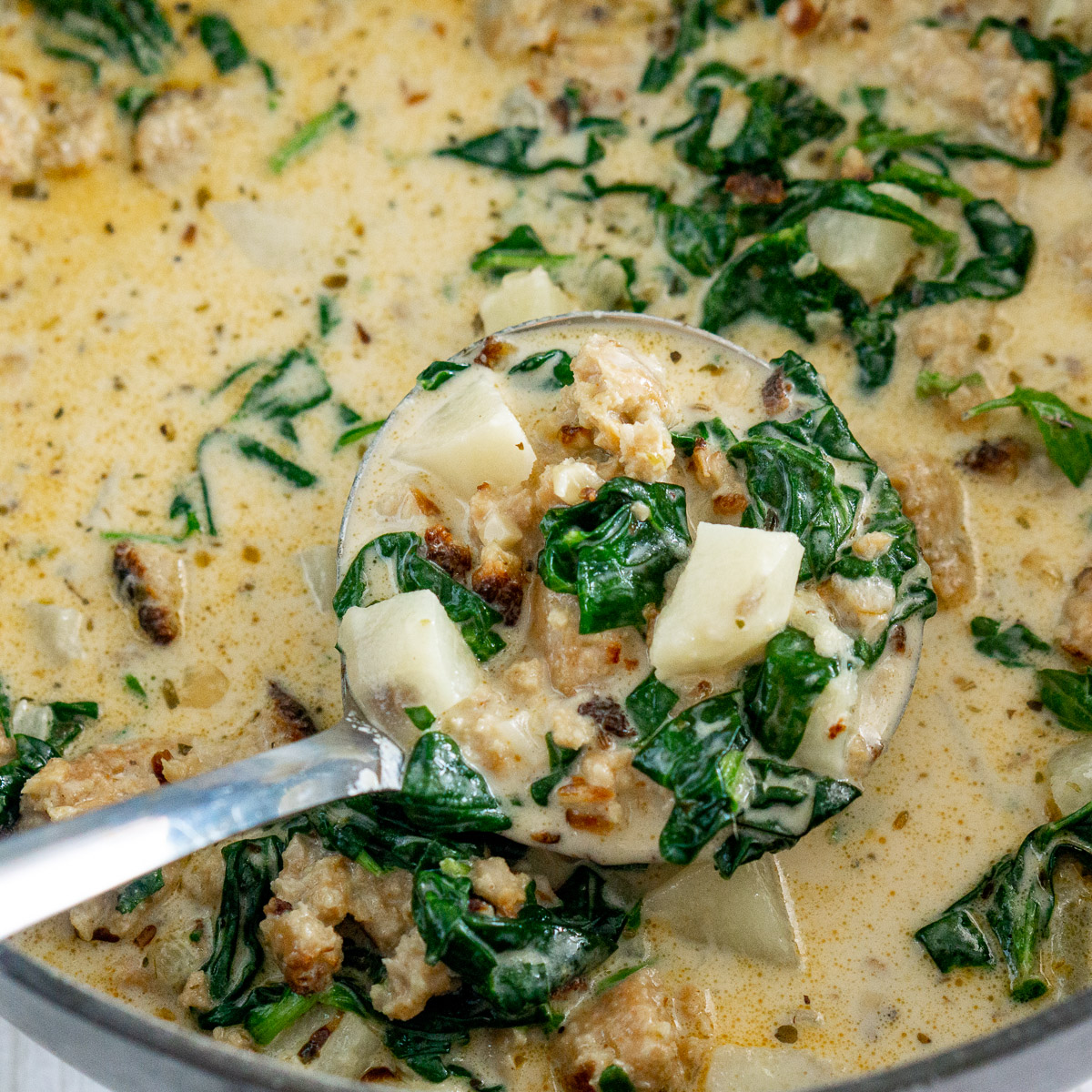 How to make vegan zuppa toscana

Start by browning the vegan sausage with the minced garlic and diced onion in a skillet. The vegan sausage will release liquid, so continue to cook it until the liquid evaporates and the sausage browns slightly. Stir frequently! 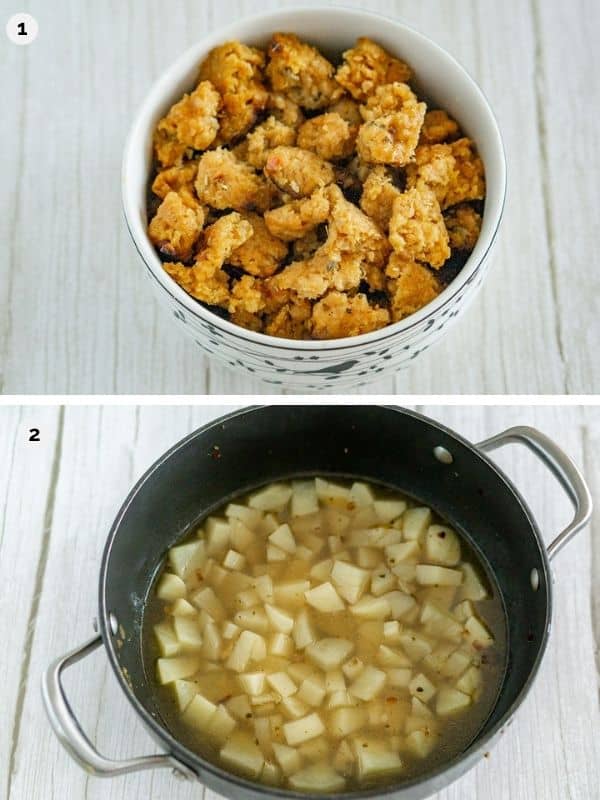 Remove the sausage from the pot and add your vegetable broth and diced potatoes. Make sure the potatoes are mostly fully submerged in the broth! Cook for 5-7 minutes, or until the potatoes are fork-tender.

Add the coconut milk, spinach (or use kale, see below!), basil, red pepper flakes, dried oregano, and your cooked sausage. Season with salt and ground black pepper, if your soup broth is not salty enough. Bring to a gently boil to heat everything through and wilt the spinach, then remove from heat. 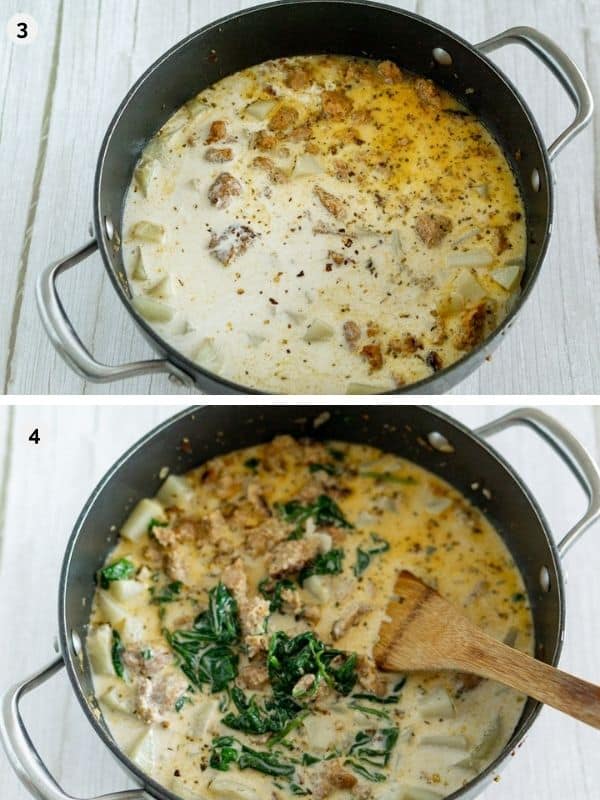 Using kale instead of spinach? Add torn kale to the soup about 3 minutes after adding the potatoes, so the kale has a chance to really soften and cook down.

What kind of coconut milk to use

I use canned lite coconut milk for most of my soup recipes. I find that it has a good balance because it has a rich and creamy flavor but it is not as fatty as full-fat coconut milk. And no, it doesn't make the soup taste like coconut in the end!

If you want to lighten this soup up a little bit, use any unsweetened plant-based milk alternative - coconut milk in a carton, almond milk, or soy milk.

I really like cooking with Pure Farmland sausage crumbles because it doesn’t fall apart too much while cooking and you end up with really hearty, nicely browned sausage chunks. They give the soup lots of flavor and a nice texture.

Other add-ins for zuppa Toscana

You can switch things up by doing one of the suggestions below, or all of these! You might need to add another ½ cup to 1 cup of vegetable stock (or coconut milk) to the soup if you're adding all of these extra solid ingredients, otherwise you'll have a very thick soup (which might not be a bad thing!).

Whatever you decide to add to this soup, I hope you love it!

If you’ve tried this soup, please let me know how you got on in the comments below – I LOVE hearing from you! You can also FOLLOW ME on FACEBOOK, INSTAGRAM and PINTEREST to see more delicious food!!

Looking for other vegan soups? 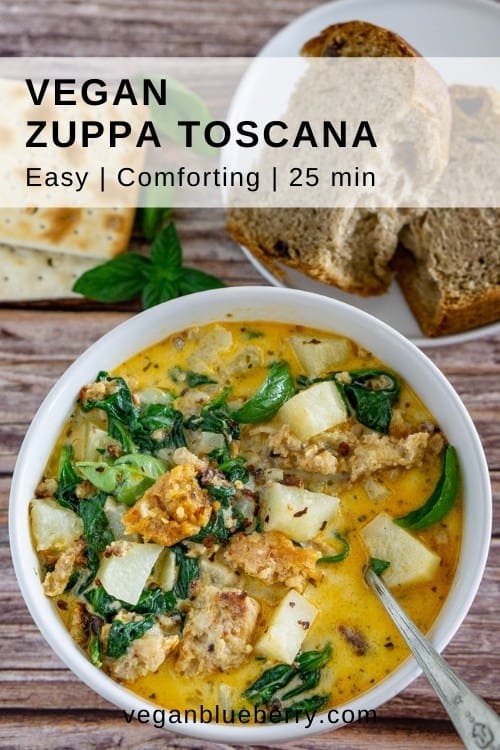 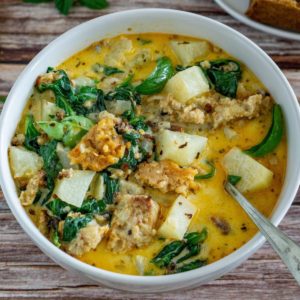 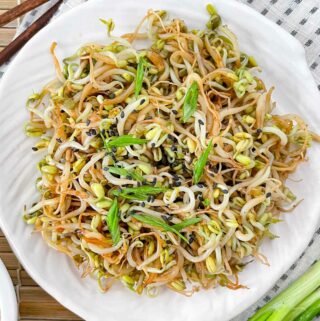 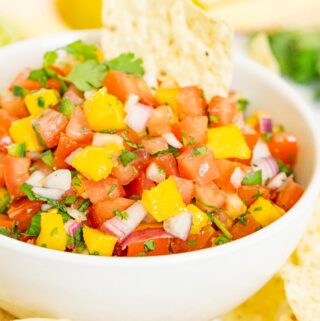 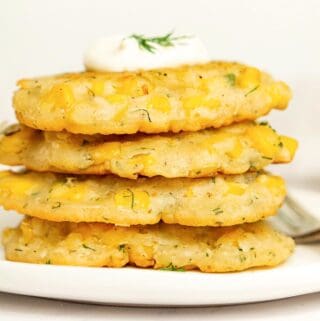